Started as a off-off collaboration in 2017, the musical partnership between the French composer and electronic music producer and Bulgarian instrumentalist is now being renewed, both live and in the studio.

An unprecedented and forward-looking meeting of the minds that melds machines with percussion, and the electronic with the acoustic,

in keeping with the Ircam initiatives, for which she has created an interactive performance. Chloé is, after all, a keen listener of music that stands outside of her electro/club milieu. With Vassilena Serafimova, she created a project as a duo that thwarts the common assumptions about electronic musicians. Originally, the collaboration was intended to be ephemeral, conjured for a live performance filmed for CultureBox, France Télévisions’ streaming platform. The Sourdoreille Collective initiated, for one evening, a live duo made up of the “classical” instrumentalist and the electronic producer, in a tribute to Steve Reich’s iconic composition Music for 18 Musicians: “this is where I was asked to meet Vassilena remembers Chloé. At that time, I was finishing my album and in particular The Dawn, which was inching towards these marimba sounds.”

Following their first encounter, the duo decided to extend their collaboration.

Vassilena Serafimova was trained at the Conservatoire de Paris, as well as the Juilliard School in New York, after completing her father’s percussion class in Bulgaria. The top-level musician has won some of the world’s most prestigious contests dedicated to her instrument, performing as a soloist and chamber musicians as part of various productions and festivals. The artistic co-director of the Marimba & Percussion Festival Bulgaria and of the Paris Percussion Group, she has also taken part in collaborations with musicians including jazz pianist Thomas Enhco (recording an album as a duo in 2016 for Deutsche Grammophon). The chemistry with self-taught Chloé was immediate, and fueled by the human complicity between the two musicians. “Chloé is my first collaboration with an electronic music personality, even though I have interpreted electroacoustic music pieces. But it’s never been as concrete as with her; that is totally new to me, a true field of exploration”. The music of Steve Reich, as the launchpad for the collaboration, was like a common language, which they gradually broke away from: “Reich is the most obvious link between electronic and academic music explains Chloé. “It was a starting point, a pretext, to go elsewhere. The idea was to then walk away from it… ».

The duo was given the opportunity to develop their collaboration as part of a residency at contemporary artist Xavier Veilhan’s Studio Venezia (the French pavilion at the 2017 Venice Biennale), where they were assisted by Nigel Godrich (a producer who has worked with (Radiohead, Beck, U2, and Air). For six days, they recorded their productions while developing a one-hour live performance. “There are very few pre-recorded parts in this live performance,” says Chloé. “The principle was the construction of the pieces around organized and disorganized structures, because I was constantly sampling Vassilena’s live performance.” Their method of composing, working, finding new ways of operating is constantly evolving. The collaboration is no longer a temporary (albeit successful) episode: it becomes a common project. “It’s a collaboration that lifts me, helps me grows,” enthused Chloé. “Vassilena is quite open to experimentation, to make room for a partner who will shake up her more academic background. Also, she always has a lot of ideas and energy. Her way of playing is very inspiring”. The marimba’s combined rhythmic and aerial character, and its alliance with beats and programming recall works such as the Cliff Martinez’s soundtrack for Soderbergh’s remake of Solaris, Pantha du Prince’s productions, or recent electronic albums like Simian Mobile Disco’s 2018Murmurations.  “The marimba the keyboard percussion instrument which offers the most possibilities with its five octaves. Compared to the vibraphone, the sound of the wood attracts me more than the sound of metal: it is warmer, more organic, it allows a great expressiveness” explains Vassilena.

Very motivated by these first steps and the excitement generated by the project, the duo has worked on a 7″ record to be released on the occasion of the Record Store Day as part of the Unik Sessions (produced by Adami and Radio France). This release features a very rhythmic track (Balani), and a more atmospheric flipside (AEB Hubavi Otchi), both recorded at the Maison de la Radio, direct to vinyl and without alterations. Today, despite their often-overloaded schedules, Chloé and Vassilena are working on a full-length album to leverage all the creative leads they have laid out over the last few months, and a work process that has become all the more seasoned, resulting in a distinctive acoustic/electronic identity shaped by the live experience. Vassilena talk about this with the expertise of an accomplished classically-trained musician: “Chloé loves to play with mistakes to create, it’s very typical of jazz musicians and improvisers. Initially we also made mistakes, but we have been able to turn them into real musical ideas… We knew how to stay flexible and open. Chloe confirms this impression and the ability of this collaboration to decompartmentalize the academic and club genres: “this collaboration changed me from the performance perspective. In this live performance, I draw my musical materials from Vassilena’s playing, adding loops, effects. I have to be constantly listening and reinterpreting. In that sense, electronic music is no longer just a genre, it is a tool which allows you to open up to other universes.” 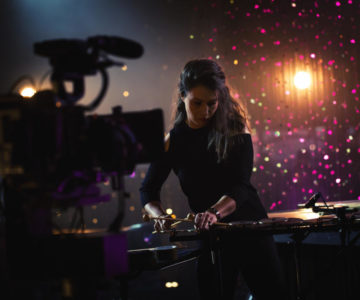 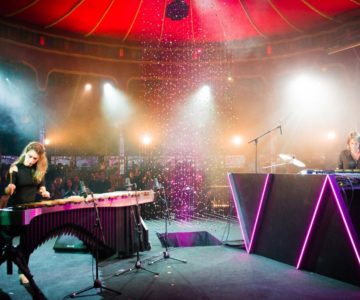 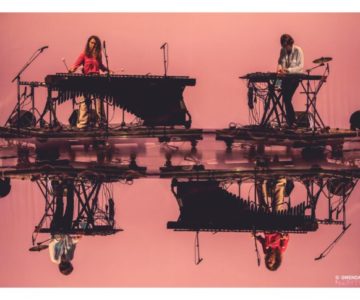