"...work with no other orchestra has ever given me as much satisfaction as my work as soloist and conductor for the Sinfonia Varsovia Orchestra." Yehudi Menuhin, 29 August, 1991

"...they are wonderful, they are one of the best orchestras, not only in Poland. First class." Martha Argerich, 23 August, 2009

The Early Years
In April of 1984, Waldemar Dąbrowski, director of the St. I. Witkiewicz Studio Centre for the Arts in Warsaw and Franciszek Wybrańczyk, director of the then extant Polish Chamber Orchestra invited the legendary violinist Sir Yehudi Menuhin to perform in Poland as soloist and conductor. To match the exigencies of
the planned repertoire, the orchestra increased the number of its members, inviting renowned musicians
from all over Poland to perform together. The ensemble’s initial concerts under the direction of Yehudi Menuhin were enthusiastically applauded by audiences and praised by critics, while Lord Menuhin himself did not hesitate to accept Waldemar Dąbrowski’s and Franciszek Wybrańczyk’s proposal to become the first guest conductor of the newly established symphony orchestra named Sinfonia Varsovia.

La Folle Journée de Varsovie
In 2010 the Sinfonia Varsovia Orchestra organised the La Folle Journée – Chopin Open Festival in Warsaw for the first time. Subsequent editions: Les Titans (2011), Russia (2012) and Music of France and Spain (2013) and America (2014) have met with great enthusiasm of Polish audiences. The ingenious works of the greatest American composers attracted a record number of 36 846 listeners. 1000 performers played 60 concerts in the course of three days. The La Folle Journée Festival is organised in Poland by the Sinfonia Varsovia Orchestra, C.R.E.A. and by the Ogrody Muzyczne Foundation, jointly with the Grand Theatre – National Opera which
will host the sixth Warsaw edition of the festival on 25-27 September 2015.

Sinfonia Varsovia To Its City
Of special note is the Franciszek Wybrańczyk Sinfonia Varsovia To Its City Festival. This unique project was initiated in 2001 by Franciszek Wybrańczyk, the founder and long-time Director of the orchestra. The festival is accessible to the public at large and it has become a landmark on the cultural landscape of Warsaw, becoming a favourite among music-lovers of the capital of Poland. The festival aims to showcase the greatest works of music literature as performed by the Sinfonia Varsovia with famous soloists and conductors. Each year in early autumn the orchestra performs free concerts in various parts of the capital which are not normally associated with mainstream cultural events. The concerts are directed by outstanding Polish conductors, including Jerzy Maksymiuk, Jacek Kaspszyk, Jan Krenz, Krzysztof Penderecki, but also by a younger generation of artists, like Łukasz Borowicz, Michał Dworzyński, Monika Wolińska and Jakub Chrenowicz. The festival is organised by the Sinfonia Varsovia Orchestra and by the Sinfonia Varsovia Foundation.

Recordings
Sinfonia Varsovia has made numerous recordings on compact disc and for radio and television. The orchestra boasts a discography of more than 270 albums, recorded for famous international labels: Decca, Denon Nippon Columbia, Deutsche Grammophon, EMI, Naïve, Naxos, Sony, Virgin Classics and for Polish labels, including BeArTon, CD Accord, DUX, Polskie Nagrania and Polskie Radio. Many of these recordings received prestigious music awards, including the Diapason d’Or, Diapason Découverte, Grand Prix du Disque and, on more than one occasion, the Polish Fryderyk award. The orchestra’s most celebrated recordings include Polish Symphonic Music of the 19th Century (CD Accord/ Polskie Radio), Martha Argerich – Live in the GrandTheatre – Polish National Opera (CD Accord), Henryk Mikołaj Górecki’s Symphony No.3 (Naïve), Mozart’s Piano Concertos with Piotr Anderszewski as soloist (Virgin), a CD of works by Karol Szymanowski conducted by Jerzy Maksymiuk (BeArTon) and The Romantic Clarinet with the famous clarinettist Sharon Kam (Edel Classics). Two albums with works by Bach and Haendel recorded for Deutsche Grammophon and featuring the virtuoso German oboist Albrecht Mayer were an artistic and commercial success, staying at the top of the charts for a long time. Featuring violin concertos by Mieczysław Karłowicz and Emil Młynarski, Nigel Kennedy’s and the Polish Chamber Orchestra’s Polish Spirit CD (EMI) was very well received around the world and contributed significantly to the promotion of Polish music. The orchestra’s discography also features many recordings made with lord Yehudi Menuhin as conductor, including the complete symphonies of Beethoven and Schubert, recorded in 1996 for IMG Records to celebrate the artist’s 80th birthday anniversary.
In June 2008, three albums recorded by Sinfonia Varsovia and the Polish Chamber Orchestra received the prestigious German Echo Klassik 2008 music award. These were: Haendel and Telemann with Gábor Boldoczki (Sony/BMG Sony Classical), New Seasons with Albrecht Mayer (Universal/ Deutsche Grammophon) and Polish Spirit with Nigel Kennedy (EMI Classics). The Polish Spirit album was awarded the Polish Fryderyk 2008 award in the Album of the Year – Symphonic and Concert Music category, while the album with the music of Mieczysław Karłowicz with Jerzy Maksymiuk as conductor and Agata Szymczewska as violinist received a Fryderyk award in 2009. In 2010, a record of Chopin’s Piano Concertos with Jan Lisiecki and the Sinfonia Varsovia Orchestra conducted by Howard Shelley received the prestigious Diapason Découverte award. Sinfonia Varsovia’s latest CDs feature concertos by Witold Lutosławski performed by cellist Robert Cohen and pianist Ewa Pobłocka under the direction of Jerzy Maksymiuk (BeArTon 2013) and albums with the music of Pyotr Tchaikovsky featuring pianist Boris Berezovsky and cellist Henri Demarquette (Mirare, 2013) and Chopin’s Concertos performed by Nikolai Lugansky (Naïve / Ambroisie, 2014); both recordings conducted by Alexander Vedernikov.

Directors
Krzysztof Penderecki became the orchestra’s musical director in 1997 and its artistic director in July 2003, a position he still holds, often also working together with the ensemble as its conductor. The musicians perform together in Poland and abroad, playing many works by the composer, including the Sinfonietta per Archi, Sinfonietta No.2, the Flute Concerto, the Viola Concerto (also its versions for cello and clarinet), Stabat Mater, De Profundis, as well as Credo and The Seven Gates of Jerusalem. In January 2011 the Sinfonia Varsovia Orchestra played the first performance of Krzysztof Penderecki’s A sea of dreams did breathe on me…, written for the National Fryderyk Chopin Institute for the conclusion of the Chopin Year celebrations. In November 2013 Sinfonia Varsovia played concerts that were part of the Krzysztof Penderecki Festival held on the occasion of the composer’s 80th birthday. Krzysztof Penderecki recorded a number of albums with the orchestra, including several with his own works.

In 2008-2012 the post of the orchestra’s musical director was held by the world-famous French conductor Marc Minkowski.

In 2004, Franciszek Wybrańczyk handed over the duties of the director of Sinfonia Varsovia to Janusz Marynowski – his assistant and long-time musician in the orchestra.

Council Cultural Institution
Until 31 December 2007, the orchestra operated from the St. I. Witkiewicz Studio Art Centre in Warsaw.
On 1 January 2008, the Sinfonia Varsovia Orchestra became a council cultural institution. The Orchestra’s coordinator is the Capital City Of Warsaw.
The Sinfonia Varsovia Orchestra was honoured with the title of Zasłużony dla Warszawy [Distinguished in Service for the City of Warsaw], the Annual Honorary Award of the Minister of Culture and National Heritage for achievements in creative output and dissemination of culture and with a diploma of the Minister of Foreign Affairs for outstanding achievements in the promotion of Poland around the world.

New Headquarters
In 2010 the Sinfonia Varsovia Orchestra has received a new home – the former Institute of Veterinary Science at 272 Grochowska Street in Warsaw’s Praga District. By a decision of the Council of Warsaw and Mayor Hanna Gronkiewicz-Waltz, an open, two-stage international competition was held in June 2010 for the design of a new concert hall seating 1 800 and architectural development of the property located at Grochowska Street. The Grand Prix was awarded to Atelier Thomas Pucher of Graz (Austria). The design is unusual not only in the very characteristic frame surrounding the whole property, but also in the exceptional design of the concert hall itself, combining shoebox concert hall acoustics with a vineyard seating arrangement. According to the designers, the combination will provide an unsurpassed, unique listening experience. The authorities of the Capital City of Warsaw have decided to implement this project in Warsaw’s Praga district. In 2015, in the presence of the President of the capital city of Warsaw, Ms. Hanna Gronkiewicz-Waltz, architect Thomas Pucher and Janusz Marynowski, director of the Sinfonia Varsovia Orchestra signed a contract for the delivery of design documentation for a new concert hall for Sinfonia Varsovia and for the development of the property at 272 Grochowska Street. The new Sinfonia Varsovia Orchestra Music Centre will be more than just an attractive place to present classical music and other arts. It will also be a place to spend leisure time. It will be an important space for the residents of the Praga District, for all of Warsaw and for foreign tourists visiting Poland. An extensive artistic and educational programme will be prepared with an audience of all ages and various degrees of involvement in the arts in mind. The first concert in the new facility is to take place in October 2021.

Educational Activities
Educational projects organised in the Orchestra’s headquarters are an important aspect of Sinfonia Varsovia’s activities. In 2012 the Orchestra initiated its elite Akademia Sinfonia Varsovia programme – a cycle of workshops for students and young music academy graduates intended to prepare them to play in the best symphony orchestras. The workshops are led by Sinfonia Varsovia’s concert masters and principal soloists. The project has been implemented in collaboration with the Ministry of Culture and National Heritage.
Educational programmes for the youngest listeners include projects organised jointly with the Music is for Everyone Foundation: Smykofonia [Toddler Philharmonic], a programme of music for children up to five years of age and the Labyrinth Event, addressed to students and teachers in elementary schools. Summer Concerts at Grochowska Street merit special attention. This is a cycle of chamber music concerts performed by young, talented artists recommended by the Sinfonia Varsovia Orchestra. The concerts are preceded by introductory lectures by musicologists and music critics. Admission to Summer Concerts at Grochowska Street is free.

The Anniversary
In 2014 the Sinfonia Varsovia Orchestra celebrated the 30th Anniversary of its activity. 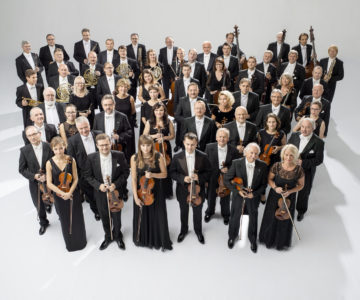 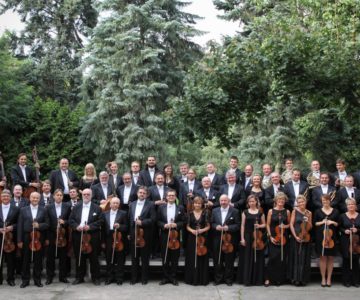