Whether it’s a concert or a disc, the critics are giving Alexandre Kantorow (born 1997) glowing reviews:

“Alexandre is already amongst the stars” Olivier Bellamy, Huffington Post.

In 2019, aged 22, Alexandre Kantorow became the first French pianist to win the gold medal at the Tchaikovsky Competition, where he also won the Grand Prix, which has only been awarded three times before in the competition’s history. Hailed by critics as the ‘young tsar of the piano’ (Classica) and ‘Liszt reincarnated’ (Fanfare), he has received numerous other awards and has been invited to perform worldwide at the highest level.

Even before the competition, Kantorow had already been attracting attention. He began performing professionally at an early age, making his debut at La Folle Journée festival in Nantes at just 16. Since then he has played with many of the world’s major orchestras, including regular appearances with the Mariinsky Orchestra under Valery Gergiev. Highlights in this coming season include concerts with the Orchestre de Paris, Staatskappelle Berlin, Royal Philharmonic Orchestra, Philharmonia, Royal Stockholm Philharmonic, as well as tours with the Orchestre National de Toulouse, Budapest Festival Orchestra and the Munich Philharmonic.

He has performed solo recitals at major concert halls across Europe, such as the Amsterdam Concertgebouw, in their Master Pianists series, the Konzerthaus Berlin, Philharmonie de Paris, BOZAR in Brussels and Stockholm Konserthus. He has also appeared at some of the most prestigious festivals including La Roque d’Anthéron, Piano aux Jacobins, Verbier Festival and Klavierfest Ruhr. Chamber music is another of his great pleasures and he regularly performs with Victor Julien-Laferrière, Renaud Capuçon, Daniel Lozakovich and Matthias Goerne.

Kantorow records exclusively with BIS, to great critical acclaim. His most recent recording (solo works by Brahms) received the 2022 Diapason d’Or. His two previous recordings (Saint-Saëns concerti 3-5 and solo works by Brahms, Bartok and Liszt) each received both the Diapason d’Or and Choc Classica of the Year in 2019 and 2020 respectively. The solo disc was Gramophone magazine’s Editor’s Choice, his performance described as ‘a further remarkable example of his virtuosity and artistry, showing both skill and sensitivity throughout’. His earlier ‘à la Russe’ recital recordings also won numerous awards and distinctions, including the 2017 Choc de l’Année (Classica), Diapason découverte (Diapason), Supersonic (Pizzicata) and CD des Doppelmonats (PianoNews).

Kantorow is a laureate of the Safran Foundation and Banque Populaire, and in 2019 was named ‘Musical Revelation of the Year’ by the Professional Critics Association. In 2020 he won the Victoires de la Musique Classique in two categories : Recording of the Year and Instrumental Soloist of the Year.

Born in France of Franco-British heritage, he has studied with Pierre-Alain Volondat, Igor Lazko, Frank Braley and Rena Shereshevskaya. 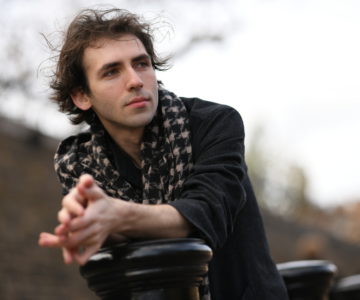 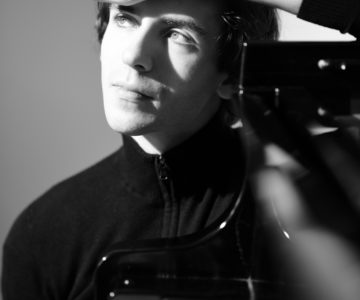 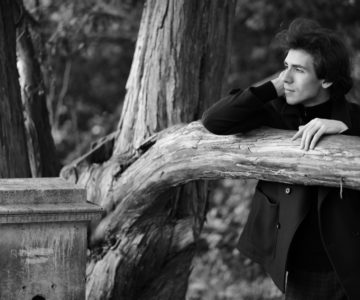 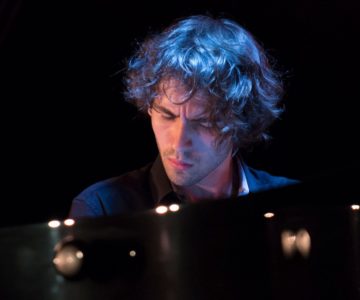 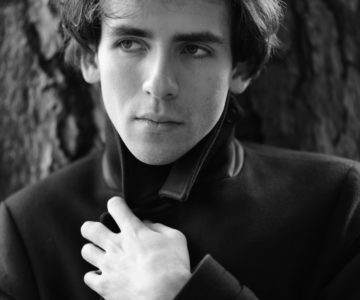 Alexandre Kantorow is coming to Japan so

Alexandre Kantorow is coming to Japan soon for a recital tour !

Alexandre is on the cover of the new issue of BRAVO Magazine !

Alexandre is featured in the latest issue of "MEG", Mixture Entertainment Guide

Alexandre Kantorow on the cover of Gramo

“He is one of the best pianists of

“Easily one of the best recital di

Read what the press has to say about these concerts !

""Making his BSO debut, the twenty-four-year-old French keyboardist tackled the work in its complete, unsimplified original version, gamboling through its thickets with an effortlessness that astonished. "
BOSTON CLASSICAL REVIEW (Jonathan Blumhofer), April 8 2022

Alexandre Kantorow, poet of the piano

Recording of the month ! 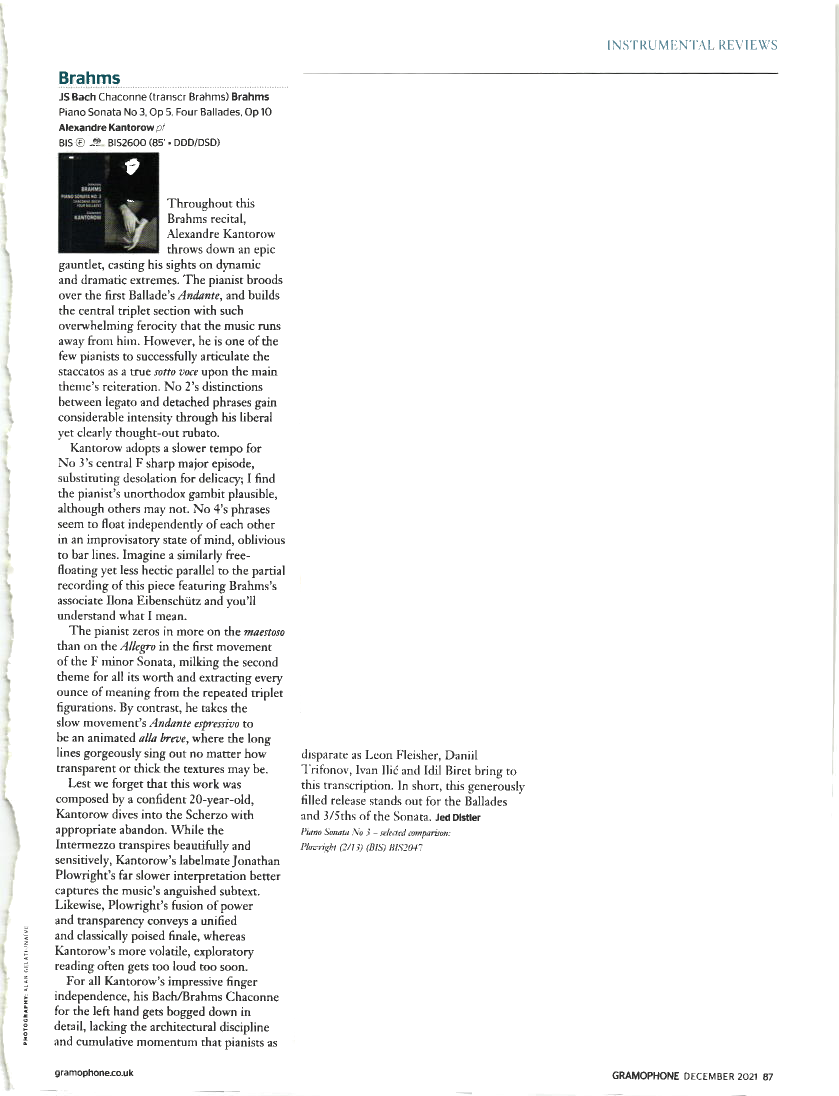 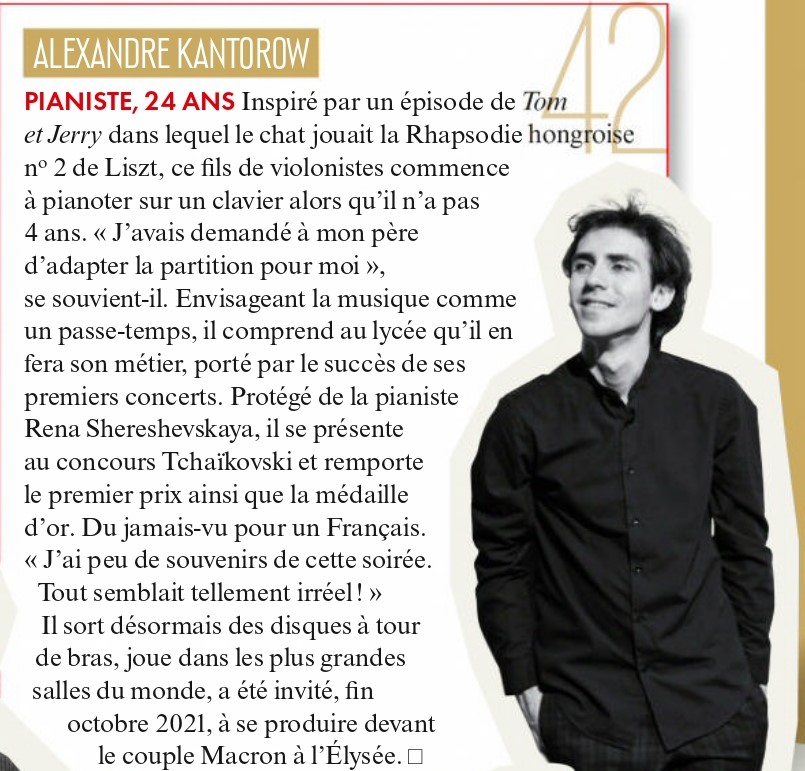